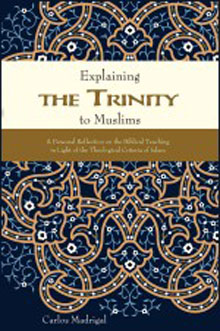 A Personal Reflection on the Biblical Teaching in Light of the Theological Criteria of Islam. This book is a culturally relevant presentation of the truth of the Trinity to the Muslim mindset. Originally it was issued through a Turkish secular publishing house and had a countrywide repercussion, even in Islamic circles. It is a useful presentation for both Muslim and Christian readers, providing fundamental keys for understanding and explaining the Trinity.

"It is a high privilege to recommend this unique book authored by long-term Spanish worker in Turkey. I can think of no other person more qualified to speak to the themes of the Christian Trinity to a secular or religious readership.

Here we have a tested and articulate veteran of Islamic ministries who has seen his understandings put through the crucible, thus producing gold. My forty-two years of cross-cultural ministry have convinced me of the urgent need and strategic role that wise publications play in our engagement with those of Muslim convictions." --William D. Taylor, global ambassador,

"Carlos Madrigal has come out with a masterful work on the Trinity. Even though it is designed for Muslims, it could well be used anywhere. This is the work of a first-class mind dealing with Christianity"™s most difficult subject, especially in the face of Muslim misunderstandings of it. Anyone who reads this work will be wonderfully comforted in knowing how beautifully the triune God has moved to achieve our eternal salvation. I believe this book will become a classic." --Don McCurry, director of Ministries to Muslims, and author of Healing the Broken Family of Abraham and Tales That Teach

Prologue to the Spanish and English Versions

Prologue to the 1995 Turkish Version

The Unity of God

The Character of God

2 - Towards a Correct Understanding

The Conclusions of Islamic Scholars

The Divine Being, Word, and Action

The Word Takes on Bodily Form

The Son: Using the Terminology of Islamic Theologians

The Definition of the Trinity

4 - Trinitarian Declarations in the Bible

Plurality within the Divinity

The Three Are One and the Same God

The Trinity and Worship

The Three Persons Are Clearly Distinct

What Does "Divine Person" Mean?

How Is the Person of the Father Differentiated from That of the Son or the Holy Spirit?

Relationship between the Three Divine Persons

The Logos Is Uncreated

The Logos Is Eternal

The Logos Is the Almighty

Jesus Said He Was God

The Apostles Said Jesus Is God

The Son Is Yahweh Himself

7 - Clues to Understanding the Trinity

Fullness and Self-submission within God

The Triune Condition and Its Mystery

Appendix: Toward the Creeds of the Early Church

The Apostolic Church Fathers and the Trinity

The Trinity in the Apocryphal Writings

Glossary: Trinitarian Terminology"”Transliteration of Arabic Terms into English and Their Meanings

The Six Intrinsic Attributes of the Divinity

1 review have been written for this product.

I bought it after borrowing it from my local library and decided to have a copy of my own.
I would thoroughly recommend this book, with an intent to increase contextual explanation I found this book increased my confidence in the relevance of the word and strengthened my personal theological understanding.