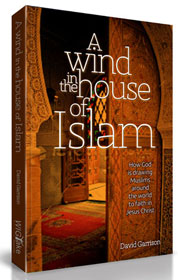 A Wind in the House of Islam: How God is drawing Muslims around the world to faith in Jesus Christ

Thirteen centuries of Muslim / Christian contact saw only one voluntary movement of Muslims to Christ (compared to millions of Christians being assimilated into the Muslim world during that long period), yet over the last couple decades more than 60 new movements have emerged.

Something is happening in the Muslim world, something unprecedented in history. Over the past 14 centuries, Islam has forged a "spiritual empire" that stretches from West Africa to Indonesia. Today, the Dar al-Islam or "House of Islam," as Muslims call their religious community, counts more than one in five persons on earth. Over the centuries of Muslim-Christian interaction, tens of millions of Christians have been assimilated into the Muslim world, but what about the opposite? Have there been any reciprocal movements--more than individuals, but rather entire Muslim communities--who have come to faith in Christ?

To better understand what is happening and why it is happening now, David Garrison has traveled throughout the Muslim world--from West Africa to Indonesia--collecting hundreds of interviews and personal stories of former Muslims from within these movements who have placed their faith in Jesus Christ. Garrison wanted to understand, "Why now?" and How is God at work in our day to see more Muslim movements to Christ than at any time in history?