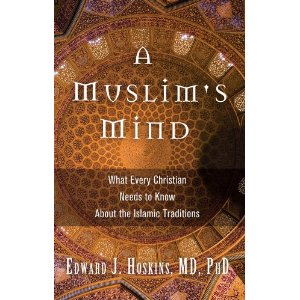 "Dr. Ed Hoskins book 'A Muslim's Mind' is a must-read for anyone who wants to truly understand how Muslims think and live. I have lived and worked and served with Muslims since 1983, so I am no novice to these thoughts. But I was shocked by the breadth and understanding of this book. My eyes and heart were opened to whole new vistas of seeing really seeing my Muslim friends. Ed, thank you for taking the time to write this amazing work. I will recommend, even insist, that everyone I know reads this book!" --Carl Medearis, author of Muslims, Christians, and Jesus

Most Christian workers rely on the Qur'an as their primary source for understanding Islam and Muslims. But it is actually the so-called Islamic traditions (the Hadiths) that influence Muslim thought and behavior more than anything else. Author and Navigator Ed Hoskins has spent years sequentially going through approximately 35,000 respected Islamic traditions, condensing them into a usable format, and organizing them into six topics:

"'A Muslim's Mind' is a fascinating book. Not only does it convey impressive research into all kinds of controversial subjects, but it also gives convincing proofs and solutions for the problems one encounters when dealing with Islam and some of the violent traditions advocated by radical groups. This book is written for the Christian who wants to understand the makeup of the Muslim s thoughts and actions. It deals with an impressive number of Arab sources that are not easy to understand or investigate. Dr. Hoskins has succeeded in dealing with them with sensitivity and depth. Most readers will find the appendix most helpful for communicating deeply with those they want to help spiritually. All the concrete details using Islamic traditions as parallels to biblical concepts are invaluable for the serious person who wants to be used by God. I strongly recommend the reading of this book." --Jacqueline Hajjar, PhD, professor, Lebanese American University, Beirut, Lebanon

"Our value systems are a primary influence in our character and conduct. In this book Dr. Hoskins taught me more in three hours than I have learned in my entire life about the value systems that motivate millions of Abraham's descendents. It should be read by every person with a vision for the spiritual welfare of all mankind and reviewed often as a primary resource for all who pray and work for God's will to be done on earth as it is in heaven." --Jim Downing, international vice president of The Navigators (retired); author of Living Legacy: Reflections on Dawson Trotman and Lorne Sanny

Dr. Ed Hoskins is a full-time physician with a heart for the Muslim community. A Muslim's Mind is rooted in more than thirty years of experience with Muslims. He and his wife, Charlene, have a passion to share the hope of Christ with their Muslim friends and mentor others who want to do the same. Ed and his wife have two children and two grandchildren, and they travel to both the Middle East and Far East. In his free time Ed likes to play chess and make wooden toys for children. Ed is also the author of "A Muslim's Heart" what every Christian needs to know about sharing Christ with Muslims.