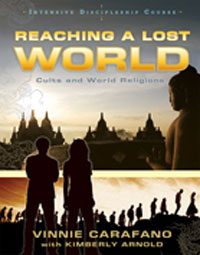 • What would you say to a Muslim friend who says Jesus was just a prophet?

• How would you expose the deception in the beliefs of Mormon missionaries?

• Could you answer the arguments of Jehovah's Witnesses at your door?

• Could you explain or defend the doctrine of the Trinity or the validity of the Bible?

Reaching a Lost World will challenge you to dig deeply into the Word of God for answers to these questions and many more. In twelve weeks you'll be equipped as a more effective witness for the Lord. You'll feel more confident to talk to members of cults and world religions about your faith and be ready to stand up for the truth.

Why should you study cults and world religions? Because our world is no longer divided into isolated parts. A century ago most Westerners would not have known a Hindu, Buddhist, or Muslim. Mormonism and Jehovah's Witness were small fringe groups, and the New Age movement had not officially begun. Today people of every major cult and world religion are nearby, living in our neighborhoods, sitting next to us in class, and working with us at our jobs. We can bring the light of the gospel to people from every belief system, and we need to prepare ourselves through study and prayer.

Each volume in the Intensive Discipleship Course series is a twelve-week, life-changing exercise of commitment and learning. Developed from years of student ministry experience, the course is designed specifically for high-school and college students, as individuals or in groups. Students will learn from: